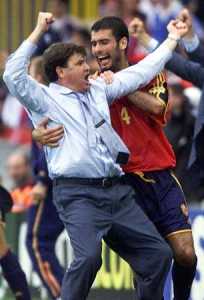 It’s a hard knock life to be a manager. To be a national team manager. Be the field marshal of your nation’s pride, or be the darling of a foreign country, a ‘white witch doctor’, perhaps? Certainly Guus Hiddink had it in Korea and Australia.

But it’s never never fun to become the man responsible for international matches. That’s why men prefer to manage clubs – more ruthless, more money-driven, and every week could be your last week at the job, but you don’t have to blame someone else the morning the national papers are looking for the culprit. When an oversexed narcissist says he hates you after he’s late for the training again, you can just sell him and shrug that he’s past his prime anyway. At least the press tend to blame the players for ‘lack of spirit’ rather than accusing you as a tactical idiot. Leave that to tweeters.

First thing first, life’s pretty hard for Jose Camacho. Look, for millenniums (millennia, dear spell checker) the Chinese have assured themselves that it’s a jungle out there, north of Mongolia and south of Vietnam and east of the coast. Chinese who left the Middle Kingdom were seen as lost souls who had left civilization.

So, when in a day in 2012, China ventured to the wilderness of Brazil’s northeast region, far from Sao Paulo or Rio, rather than arranging a match in say Dubai or Switzerland, just when Japan thinks its wiser to invite random Latin American or Southern European teams to Japan under the guise of ‘Kirin Challenge Cup’; China said “Look Mom, I’m a grown man and I’m willing to travel to Brazil rather than paying Hulk and Neymar to come here to say hello to Didier and Nic.” Good God what did they think. They might as well burn a wooden dragon and call it The Ashes of Chinese football. Recife, 10 September 2012.

Here’s parting shot on China – they can export anything but not footballers. Haw haw.

Move on. It’s a hard life for Alex Ferguson, seeing his goods damaged by national federations – Jones, Kagawa, and van Persie. But after Tuesday night, all Japanese fans could sleep soundly and it’s safe again for me to wear Germany 2006 shirt on Wednesday. Mahmoud could  have scored had not for referee intervention, seeing him toying with Kawashima? Sure. Honda was yeah good but he should have scored? Of course. Iraq were the better team even with rookie starters? What can you say.

But it’s Japan 1 Iraq 0. It’s ten points from three victories. That’s three or four more wins before it’s Samba 14. In the night where it’s Serbia 6 Wales 1, Peru 1 Argentina 1, and England 1 Ukraine 1. Closer to Saitama, it’s  Uzbekistan 2 Korea 2, and Ki Sung Yueng scored an own goal and Lee Dong Gook had his effort cancelled just after the kick off. More importantly, it’s Lebanon 1 Iran 0. And here it comes – Jordan 2 Australia 1. With Schwarzer on the goal and Cahill and Bresciano on the case.

So, who’s got blamed? Not the coaches for now. Australians are complaining about ‘Dad’s Army’ and Osieck says that some will be fired. Oh sure. But can Langerak replace Schwarzer? Will Jones play for Liverpool in the league, not the League Cup? Where does sideback David Carney live? Tashkent, Uzbekistan. What about Spiranovic? His address is in Doha. Great for executives but not for a footballer. What about Matt McKay? Busan, Republic of Korea. Hmm…what about the heir to Kewell or Viduka? Oh, you mean Robbie Kruse? At least he’s playing for his country, unlike his teammate Cha Du-ri.

No one would think of this ten years ago – Anglo-Irish Australians don’t play in the EPL* and the Italians don’t play in Serie A. Now Japanese youth are learning German (I hope they do…but I don’t hold my breath) while their seniors are living uncomfortably in small cities like Manchester or Stuttgart, which are not as glittering as Tokyo (I hope you are happy now, Sota Hirayama). Compare their fates with the young Australians who enjoy good life in Busan, Doha, and Abu Dhabi. And of course Melbourne, the greatest city in the world.

At least now Aussie press are in panic mode. Which is good. Because we just had an Olympics football without ‘roos and Mathildas. There’s a risk, some say, that Australians will see a World Cup without Australia. Nonsense. Even if Iraq manage to become the runner up of the group, and thus fulfilling George Bush’s vision of an achieving Middle Eastern state, Australia will meet Uruguay in the Intercontinental Playoff after bested future tournament hosts Qatar. If you want to bedevil someone, let him be Luis Suarez.

PS: Apparently Sven-Goran Eriksson has read “100 Bullshit Jobs and How to Get Them”. Technical Director. That’s a bullshit job. So does “Global Advisor”, but the latter is located north of Manchester, while the former is located in Bangkok. It’s a good life and he will not take the blame when BEC Tero Sasana still don’t compete in ACL 13.