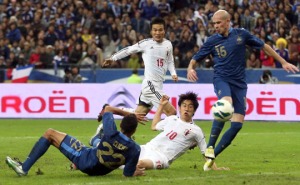 Yo, finally I’m doing something with my layout. Ah, the first step toward professional attitude.

The 2015 AFC Asian Cup certainly looks professional. It is hosted by Australia. It has Japan and Republic of Korea. And North Korea. Since uh, it won something called The Challenge Cup, defeating Turkmenistan. Philippines came close, winning third place against Palestine. So, maybe that’s a key for success in Asia – aim low and you can get the ticket while the mediocre cannot.

Ah, the mediocre. You know, minnows like Iran, China, Saudi Arabia, and Indonesia (well…). They have to fight to death throughout 2013 and 14, as if Iran and Uzbekistan are not preoccupied with Rio, um, Brazil 2014. Travel to Tashkent. Sodden pitch. The humidity. Uglier prostitutes. At least in Asia crowd riot is hardly a problem, unlike in Africa.

And yeah, it’s unfair that Japan and Korea, and North Korea, do not join the qualification. According to Thai coach Winfried Schaefer, his team deserve Japan. Or Korea. They deserve Kagawa and Ki Sung-yueng. Because Iran, Kuwait, and Lebanon are not enough for him. Here, even Spain had to qualify for Euro 2012. He said that even Italy and England had to qualify, even if England didn’t play at all in Euro 2008. But I missed the point. The point is Thailand demand to see Japan. How else they will improve if Honda and Endo do not give them sick free kicks? Why on earth Niweat Siriwong should fly to Teheran instead of Seoul?

Well, Schaefer has a point, hasn’t he? It was ridiculous when India, Iraq 2008 (the crappy model, not the sleek 2007 model), Saudi Arabia, North Korea, and Korea already qualified to Qatar 2011, right? True. But to say that the qualification ‘leaves the minnows to fight for themselves while the heavyweights qualify’ is wrong. Australia are the host. Okay. But how many heavyweights are there? Japan, one. Korea, two. Why nobody protests about AFC Challenge Cup? If they are nice enough to make comparison with UEFA, would UEFA make a Challenge Cup, where Cyprus or Armenia could qualify after defeating Malta in an extra time thriller, while Wales and Israel languish once more. Actually, I might have given Michel Platini a brilliant idea.

If the automatic qualifications of the winners and runner ups of a previous Asian Cup is weird, so does the bloated European qualifications. European press are asking why UEFA still do not apply first and second round qualifications for the weakest teams before going to group stage – a system widely used in club championships. Why can’t San Marino have a playoff or group stage first against Andorra and Faroe Islands? Because, of course, UEFA believes that kids in Belarus deserve to see David Silva and Xavi in action, even if kids in Spain cannot watch them on television. More cynically, because Gazprom, McDonald’s, Sony, and Adidas deserve to be presented ten times by a single favorite team, compared to probably six times had Spain and Germany played third round qualification. But again, UEFA does not have this concern in the Champions League.

If the purpose of AFC Challenge Cup is to challenge the proficiency of Nepal and Taiwan in football, then be it. But the prize of winning the Challenge Cup should be a place in the qualification group stage, not the final tournament. If there’s should be a playoff between the winners of the CC with Asia’s no. 19 or 20, then be it, like the playoff for promotion and relegation in Dutch and German leagues.

Still, I cannot help from thinking that the sole purpose of AFC Challenge Cup is to pass India into the final tournament. Maybe North Korea too, but I do not see the financial logic of giving a free pass to North Korea.

What now for Japan and Korea? Of course, friendlies against the big boys. Before World Cup 2010, Japan still had to handle Yemen and Hong Kong. Now they have arranged friendlies against France and Brazil. Great. Korea should follow suit. Play with guys such as Mexico, Egypt, Sweden, and Australia. If Thailand want to test themselves against Japan, then pick up the phone and call JFA to arrange a friendly. But make sure you know first how to handle Iran and Lebanon. Heck, make sure first you win the AFF Cup.