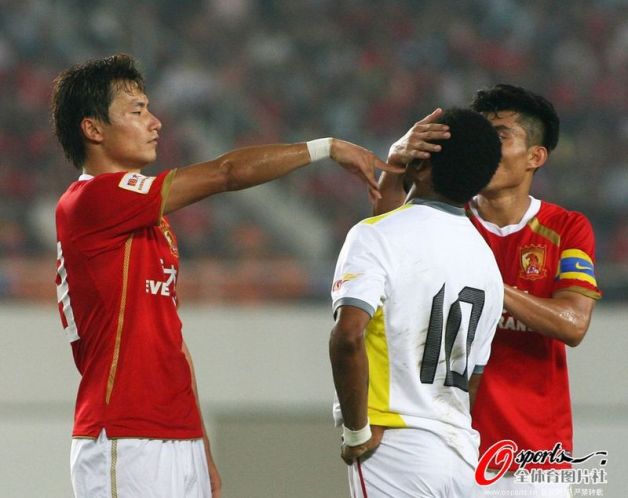 Well, if this blog is about East Asian football, then this blog has to write something about when a K-League club does not win the AFC Champions League for the first time. The ACL trophy stays in East Asia, this time in China.

Guangzhou Evergrande did have to win the 2013 Champions League. For them to fail to do so is like Chelsea failing to win anything with Mourinho (eh. oh.), like Manchester City cannot prosper in Europe (…), and like France being put in Group A in a World Cup with easy opponents that included Uruguay (what’s your point, really?). We have to think of Marcello Lippi’s legacy and stories he tells to his grandchildren.

And so, Evergrande’s victory is China’s football renaissance? I’m belonged to those who think no, they won because they got the right South Americans. Of course, they had to be supported by able Chinese (and Korean) defenders and goalkeepers, otherwise they would keep losing 2-3 and 3-4. And oh, Guangzhou defeated Seoul by away goal aggregate instead of a win. This one’s thanks to AFC again.

In modern football, it’s hard to argue that Evergrande is not a Chinese team just because more than half of their goals this season in China and Asia were scored by Dario Conca, Elkeson, and Muriqui. That’s all. That’s all they needed. No different to other teams in Japan and Korea or Thailand, and compared to European teams like Chelsea or Internazionale…

Tonight China won 1-0 against Indonesia in the 2015 AFC Asian Cup qualification. And China didn’t look that good, playing to their advantage deep in the continent (OK, I can hear them arguing that United States choose Kansas and Colorado for CONCACAF matches). This is the team that fielded Zeng Cheng, Rong Hao, Zhang Linpeng, Zhao Xuri, Huang Bowen, and Gao Lin. Guangzhou Evergrande minus the foreign players. That’s how they fared – winning 1-0 against a Southeast Asian team who could not exploit their mistakes and of lesser skills. Next week they hosted Saudi Arabia, and I want to see the Guangzhou players to kick up their standard.

Guangzhou Evergrande’s victory is a victory for the team, no matter how China wants to see it as a victory for China. Certainly the national team live in another world. Apart from the inferiority demonstrated by Chinese players tonight compared to watching Japan and Korea, I was concerned by two things. First, China kept attacking when Victor Igbonefo lied down injured on his own penalty box. It was bad enough for Australian referee Peter Green to not call of play. It was worse for Sun Ke to press on and attempted a shot on goal (Indonesian players protested to Green after the ball left the field). I understand that there’s no big moral obligation in throwing away the ball when an opposition is injured, but it was simply not fair play (don’t give me the East Asian rubbish that “football is war”, quoted/misquoted from a Dutch).

Second, it was fun to see Korean supporters being sexy and cute. It was bit disturbing to see Chinese supporters – didn’t see much female to my surprise – literally went shoulders to shoulders in red tracksuits. Uniformity starts to creep me out.

Among my favorite athletes are Yao Ming and Li Na, but I start to understand why I cannot support China football the way I support Japan’s and Korean. The fan culture seems not fun, but can be scary like what I saw tonight. In short, it’s just not cute enough.