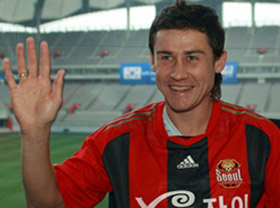 Because AFC still doesn’t take Asian football seriously. Server Djeparov is again the best male footballer in Asia because he can come to the award night in Kuala Lumpur on a Thursday night in November. Nevermind that Shinji Kagawa just scored against Arsenal on the same night – despite a tooth injury. Nevermind that South Korea prove that they cannot live without Park Chu-Young, who wasn’t even on the bench for Arsenal last night. The point is, Djeparov earned 110 points while Keisuke Honda had 87 points.

The justice was that Aya Miyama wins the best women footballer award ahead of Homare Sawa and Ayumi Kaihori. Miyama scored in the 2011 World Cup Final (big apologies for not blogging that great tournament) and hugged Hope Solo afterward. Then the availability of Japanese players in the ceremonies, instead of competing in United States, brought in a sad fact – even United States cannot organize a decent women football league, and women football is still not properly appreciated worldwide.

In Southeast Asia, the Southeast Asian Games (Jesus people, it wasn’t even AFF Cup. How long you do you think Argentina and Nigeria will dwell over Olympics football?) left several nasty impressions for Indonesian and Malaysian football. For Indonesia, mixture of admiration for the successful Young Garudas and the bitter sadness of going down to Malaysia twice. For Malaysia, big relief of defending the title from the previous SEA Games, following the footsteps of the seniors, and the distress on how do the Indonesian supporters express their hatred and anger for Malaysian flag, Malaysian national anthem, Malaysian athletes, and the existence of Malaysia itself.

Malaysia were happy to win twice against Indonesia, going home with coach Ong Kim Swee as a hero, and moving on to the next business for pre-Olympics tournament. Indonesians coped with the loss with various reactions. Some blamed referee Toru Minoru for disallowing two Indonesian goals (nobody pointed out that he also disallowed one Malaysian goal), some did the right thing and applauded the young footballers and the manager, and some even said that the players are not real Indonesians since many of them are Christians.

PSSI, the Indonesian FA, has taken two worse decisions. First, it says no more naturalization. Because it fell out with golden boy Irfan Bachdim (born in Netherlands), it is disappointed with Cristian Gonzalez (spent most of life as an Uruguayan) although he had scored twice against Qatar, it doesn’t need Kim J. Kurniawan (Chinese-Indonesian father, German mother, sister is pregnant with Bachdim’s baby), and is angry with dashing U-23 defender Diego Michiel (born in Netherlands). But most importantly, it is angry with two Nigerians, Greg Nkwolo and Victor Igbonefo. First, they are playing for the wrong club, one of clubs that refuse to play in PSSI’s proposed 24-clubs league. Second, because the Nigerian football association is said to fail to reply on the inquiry if both players had played for Nigeria. So, for PSSI, naturalization gives no quick benefit.

Second, because of the league dispute, PSSI just declared that they will not pick U-23 players who are with the dissenting clubs (well, the majority of top-tier clubs are dissenting), many of them are playing in high-performance club Persipura which reached the 2011 AFC Cup quarter finals. So if Indonesians loved those dashing Papuans in the SEA Games, they won’t be seen again in the already doomed AFC Asian Cup 2015 qualifications.

One thing about naturalization. Yes, Indonesia is much populous than Singapore and football is a sport that everyone follows, unlike Philippines. So naturalization was unnecessary in the first place. I understand that several European players with Indonesian heritage are not that gifted as Nigel de Jong, Giovanni van Bronckhorst, and Johnny Heitinga. They were stuck in the 3rd division and so before Indonesia offers them hope of wearing the national jersey. Sergio van Dijk leads a good life in Australia but he knows he won’t be called by the Oranges. Others fall in love in and with Indonesia and have built their families here.

The naturalization scheme of 2010 was a quick-rich scheme, exploiting Gonzalez’s desire to become the best striker and to make the local football sexier with youth like Irfan. Philippines called in the Younghusband brothers and hired the 30s something McEnemy for the same reason. When the scheme failed in the last moment, everyone, both PSSI and the press blame the players. It’s not they demand excellence. It’s more like they were really suckered by that quick-rich scheme.

Matches of interest lately: Suwon – Ulsan 1-3 p (both Seoul and Suwon are out of the 2011 K-League Championship. I know I made a wrong decision by supporting Seoul while I should choose Jeonbuk). Arsenal – Dortmund 2-1 (Kagawa was mercifully not subbed to the end so he could score). Tampines – Home United 1-0 (all the good Etoile 2010 players are now in Tampines). Bahrain U-23 – Japan U-23 0-2 (yeah Higashi & Otsu).