You have to love to score.

After seeing Shinji Kagawa wasted too many chances (many he created perfectly) in the Champions League match against Real Sociedad, I tweeted that he experienced the classic Japanese problem of passing, not shooting. A Dutchman didn’t take this well and reminded me of Shunsuke Nakamura and Keisuke Honda.

Of course, the Kings of Asia don’t become the best of Asia (now still are, with Australia in decline, but well Australia won their last friendly, unlike Japan) by passing and winning penalty shootouts. By the time Kagawa scored almost 20 goals for Dortmund (2011-12) and Honda scored 9 goals for CSKA  (2012-13), I thought we had been through that.

Honda’s shortcomings are evident when playing with Japan this year, as he becomes the designated central attacking midfielder behind the striker (pushing Kagawa to the left flank). Still, in this position he has scored six times for Japan this year, but he should have scored more – against Australia, Mexico, Uruguay, and of course in the last dreadful friendlies against Serbia and Belarus. Even it seems that he has past his prime in CSKA, although that also has to do with his decision to move next year (he made the assist in the infamous CSKA 1 Manchester City 2 match).

As for Nakamura, I forgot that he was also a terrible shooter for Japan – the right midfielder, and one of best free kick takers in the world in the last decade, had not scored more than 3 goals in every major competitions since 2003 (meaning he scored 3 goals in 2003 FIFA Confederations Cup, and scored 1-2 goals in every Confed Cup, Asian Cup, and World Cup since then).

Lionel Messi, Oscar, and Neymar prove that body mass is not a big factor in being a deadly attacker. Even Japan have got its dream mecha in the form of Mike Havenaar, but he regularly becomes a substitute that comes in the last three minutes for Japan. Last semester he had to wait for Maeda, this semester for Kakitani.

I got the clue on what’s going on when reading on Li Na’s preparation for the WTA Championship final against Serena Williams. Li’s coach Carlos Rodriguez said that she needs to have more confidence, and Li said that’s been her career-long problem, lack of self-confidence.

There you have it. She can be the first Asian Grand Slam champion of our time and constantly participates in the WTA Tour Championship, but permanently takes herself as the underdog. She’s not alone, and most Asian athletes experience the same problem. The global media, of course, take the Asian athletes as the underdogs. The Asian athletes take themselves as the underdogs not only because of lack of self-confidence, but because they were raised and trained differently to their African and Latin counterparts. The group think, the suppression of individuality, and the overemphasis on team identity.

The Korean national team presents an interesting case – not long after Ki Sung-yueng was booed by fans and suspended for complaining against coach Choi Kang-hee (some fans demanded worse punishment), the coach himself and new star Son Heung-min talked trash to Iran, and humiliated themselves during the match. The trash talking itself was pretty out of character – but well, it was a case of sanctioned group think, as opposed to Ki’s personal statement.

So I think the reason that Kagawa was reluctant to shoot was because he was so aware of his role as a left midfielder. He wanted to provide assists to Rooney, and even seemed to have some last thoughts that affected his power and decisiveness. When he scores, he wants it to be as a result of team effort and according to his role – that’s why he was comfortable to become a second line attacker in Dortmund. This is a man who scored a beautiful volley against Italy in the Confed Cup, and at that time he had the conviction that the team work phase had been completed.

And the myriad of Japanese strikers who failed to make it big? Maybe their skills were not that good compared to the midfielders (same goes to the Australians, while Korea are supposed to have better forwards…but yeah, they have bad mentalities). Maybe they have become victims of the public and JFA’s pressures to find the suitable striker and cannot hold on their position for more than six months. Certainly Japan need to ditch the lone forward formation and put in two. Just make sure that they do not end up passing the ball to each other*.

*good thing Okazaki and Havenaar scored for their teams last weekend, with Okazaki scored his first brace in Germany.

New season in Europe and bigger competition for Asian players to win the starting 11 position (or at least being the steady sub). At the stake is the call up to represent their national sides in Brazil 14.

Australia certainly have less footballers playing regularly in England and Italy compared to ten years ago (and on the surface, more of them play in the Middle East and Asia), but that don’t necessarily mean they are out of Aussies playing in Europe.

Mark Schwarzer is certainly still be Australia’s number one in Brazil, and he is willing to sit for Petr Cech if that means he can train with Chelsea (more importantly, Chelsea was willing to grab him. Seems they really don’t have any sub goalkeeper left besides Hilario.

Similarly, Mitchell Langerak is the understudy of Roman Weidenfeller, who will certainly become one of Germany’s prime choices. He is yet to play for guard the posts for Australia. Matthew Ryan, formerly a Mariner, is the first pick for Club Brugge in Belgium and is competing tightly with Japan’s Eiji Kawashima (more on Japan section). No such luck for Adam Federici, now the sub goalkeeper at Championship’s Reading. Similarly Brad Jones wishes that he’d have more air time with Liverpool, seeing that Belgian Simon Mignolet (with big ambition himself) has settled well in his debut at Anfield.

Top three: Schwarzer, Ryan, and Langerak or Jones. Their toughest competition would be Eugene Galekovic.

Luke Wilkshire is playing his sixth season in Dynamo Moscow but the competition is tough with younger locals. Michael Zullo is struggling to get into the Utrecht bench, while Rhys Williams is having less competition in Middlesbrough – ditto for Jason Davidson.

Top four: Well, that’s all we have. David Carney is in New York, Lucas Neill is in Omiya, Japan, and Jade North is in Brisbane.

Tommy Oar has secured his winger position in Utrecht and how many rivals you think James Holland can get in Austria Wien? Mile Jedinak look strong in Crystal Palace. Tom Rogic is still hoping for his Celtic moment, Nikita Rukavytsya must fight for his position at Mainz, and Terry Antonis is developing in Parma. Carl Valeri hopes he can do something with newly promoted Sassuolo, Ben Halloran must try harder in Fortuna Dusseldorf, and finally Adam Sarota is still recovering from injury in that Little Asia club called Utrecht.

Top four: Oar, Jedinak, umm..well, not very promising is this? Cahill is in America while Bresciano is in Qatar. Holman is in UAE while Nichols is playing for Melbourne. Victory.

Robbie Kruse is of course Australia’s great hope, that if he can prevail over the Sam-Kiessling-Son trio. Mathew Leckie is steady with FSV Frankfurt, while Eli Babalj is waiting for his star to fall at AZ.

Top two: Kruse…and Leckie. A-League’s best are Thompson and Duke, while Kennedy is still in Nagoya and Brosque is still in UAE.

Samurai Blue is still in terrible form with only two players standing out: Kagawa and Honda. And Okazaki now and then. Still, it doesn’t hurt if they keep their German conversation club going.

Eiji Kawashima bounces back from his humiliation with Japan in the Confederations Club and friendly against Uruguay with four clean sheets with Standard Liege, now number one in Belgium. Looking forward for Liege vs Brugge.

Top three: Nothing much here – Kawashima, Nishikawa from Hiroshima and Gonda from Tokyo. With Hayashi from Sendai trailing, but he’s pretty old.

Atsuto Uchida is one of the most high profile right back in Bundesliga and is now linked with Arsenal. It’s all up to him (remember that I wrote that Wenger disrespects his Asian players). Yuto Nagatomo hopes for a better year with Internazionale with him performing. Gotoku Sakai is the prime right back for Stuttgart. Maya Yoshida, however, faces a tougher second year with Southampton. Hiroki Sakai enjoyed a promotion to the first team with Hannover. 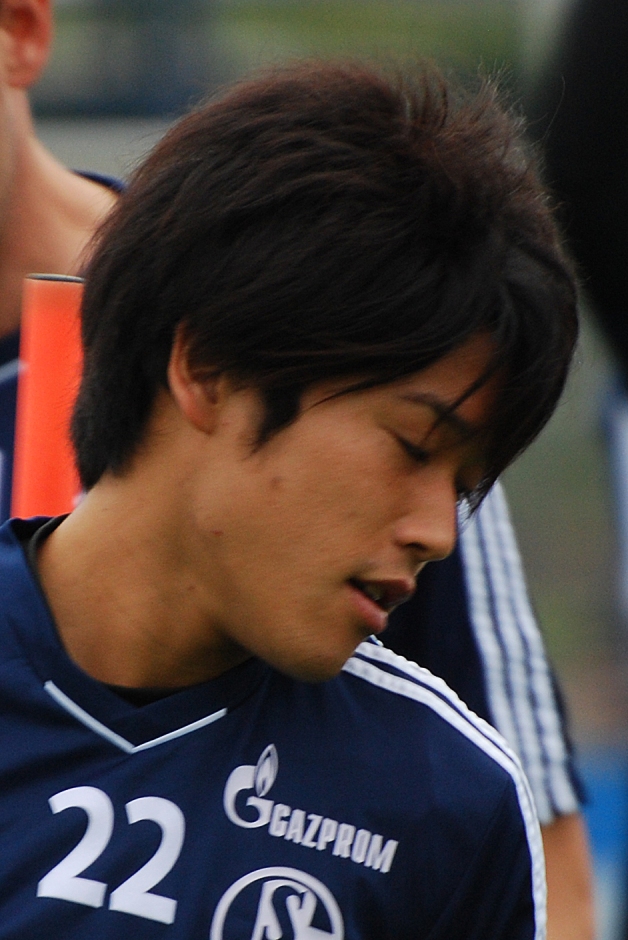 Top four: With all these boys, we wonder how the hell Japanese defense was terrible.

Top four: Hosogai, Inui, it depends if you think how VVV fares against Nagoya or Kashiwa. Otherwise, there are Aoyama and Takahagi from Hiroshima and Yamaguchi and Ogihara from Cerezo.

These are the best bits: Depends on the month, Kagawa and Honda can be forwards or midfielders. The surprise is that Keisuke Honda stays in CSKA, but he knows damn well he’s the best in Russia. Shinji Kagawa, on the other hand, didn’t show his super-ness in Manchester United’s Japan tour and had better times with the national team (thank God). Remains to be seen if he’ll get a place in Moyes’ scheme. With Bony in England, now Mike Havenaar is Vitesse’s point man. Time for him to work on his magic. Hiroshi Kiyotake has scored for Nurnberg while Shinji Okazaki faces the similar gauntlet to Havenaar – being the main striker – for Mainz.

Top two: Honda and Kagawa, with sadly somebody gotta give for Brazil. Not to count that there at least one player from J. League. I’m among the Sato faction, but he can turned out be Kakitani.

Finally, Korea. Which are in deep shambles. If Guardian Football recruits fans again for Brazil 14, I’ll go for Korea again seeing there are plenty British covering Japan. And Australians covering Australia. Heck, sometimes I do the explanation for Koreans in Indonesian media as this big expat group is too silent to explain themselves.

There’s no Korean keeper in Europe.

Park Joo-ho plays with Okazaki in Mainz. If Nikita can return to form, then Mainz have the complete Asian outfit. Yun Suk-young isn’t a part of Queens Park Rangers’ new Empire image (they defeated Ipswich Town with 9 English, 1 Irish, and 1 Canadian last week. Not that any Southeast Asian cared).

Top four: Euh, can I talk about how Korea recruited all Japan-based defenders instead for the friendly against Peru? At least they were tight.

Top four: Nobody nobody but them.

Top two: Son and well, shall we give Park another chance?

I want love in a peaceful world.