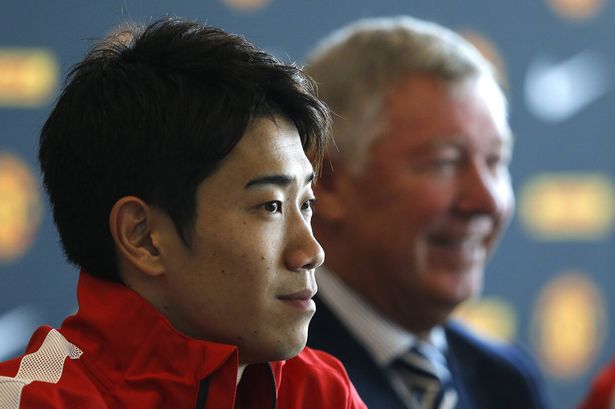 One is a socialist Glaswegian. The other is an Alsatian who grew up speaking German and became successful managers in Monaco and Nagoya. Choose which one will be responsible for making some Asian footballers known worldwide.

Arsene Wenger was naturally well-liked in Japan. First, he’s French. He gave Nagoya Grampus the Emperor’s Cup and became the manager of the year in 1995. He brought over Dragan Stojkovic from Marseille and almost 20 years later, Doragan-sama is still the hero of Nagoya. Another Nagoya’s star was Yasuyuki Moriyama, who played in Slovenia in 1998-99 before enjoyed an Indian summer with Nagoya again in 2001.

The English press was skeptical when he went to Arsenal – a Frenchman whose previous football experience was in Japan. His economics lecturer look felt excellent in Japan – a typical sophisticated Frenchman – but felt bit poofy for the English. Hey, this was the dawn of both the Premier League and Cool Britannia. Still years before Chelsea became Italian…and actually roughly the same year when Middlesboro became Brazilian.

World Cup 1998 was a bad advertisement for South Korea and Japan, but nonetheless an advertisement. There must be some good young players among the 2002 World Cup hosts, someone like Hidetoshi Nakata. There were so many promises from the U-20 squad that went to the 1999 World Youth Championship final (where they failed to defeat Iker Casillas).

Wenger chose Junichi Inamoto, a 1.8 meter baby faced blonde who was impressive in the 2001 Confederations Cup. Unfortunately, Inamoto found it harder even to secure the subs bench, competing with so many dashing trailblazers (pecking order: Vieira – Pires – Ljungberg – Gio – Edu – Lauren – Parlour – Pennant – Inamoto) He made no appearance in the Premier League and the FA Cup and was released before the 2002 World Cup, where he scored against Belgium and Russia.

After the 2002 World Cup, clubs around Europe were drafting Japanese and Korean players. Ferguson was still not interested. Inamoto went to Fulham, still in London so he could save his flat, and scored four goals in Europe (all against Bologna) and also against Manchester United when Fulham defeated Ferguson’s men in October 2003.

Still, Japanese and Korean footballers struggled to win trust, consistency, and reputation. They could last in Europe for years, but as journeymen, cult favorites, and loans. Hidetoshi Nakata experienced steady decline (by his own design, many Japanese fans said) and ended his experiments with soccer, style, and sex with Hollywood stars (Milla Jovovich and Maggie Q were two names that I knew) in Bolton, Inamoto failed to win the trust of mid-table managers, and long-term injuries seriously impaired their chances to stay beyond the second season (not for the last time).

Now I’m thinking about a pattern. Like Borussia Dortmund, PSV Eindhoven was a hip club, a mini iPod. When the hyped Arjen Robben left for Chelsea (and touted as a killer app for both Arsenal and Manchester United), the midfielders of PSV became a quintet of likeable and better-sum-than-its-part men from three continents – Mark van Bommel, Phillip Cocu, Johann Vogel, DaMarcus Beasley, and Park Ji-sung. Park started as the uglier brother for the Korean duo Guus Hiddink brought to Netherlands, compared to Lee Young-pyo (although Park was the one who shattered Portugal in the 2002 World Cup). He caught global attention (i.e. Manchester United noticed him) when he scored against Milan.

So why did Ferguson choose him? He was seen as a cover for Ryan Giggs. Since Japan and Korea hosted the 2002 World Cup and the aftermath, already cynics said that Asian players were recruited ‘to sell shirts’. Unfortunately, some Asians subscribe to this racist concept, as if Asians cannot be decent footballers. Park Ji-sung had also to refute that kind of accusation – even when you think about it, he’s not worse than many other Africans, British, and Europeans that Manchester United or any other big European clubs had signed.

In Manchester United Park was not a stellar player – hard to do so when you’re playing with Michael Carrick, Cristiano Ronaldo, Nani…and well, Ryan Giggs. Some Koreans saw him as overrated, but they had to admit even after the 2006 World Cup, where he jeopardized France’s chance of survival (they survived, Korea didn’t), he would still be Korea’s best player. Lee Chun-soo was too problematic, Park Chu-young was untested in Europe, Seol Ki-hyeon struggled, and Lee Dong-gook slaved himself to alcohol. In 2008, he lifted the Club World Cup and a year later, he became the only Asian player to play in Champions League final, after scoring against Arsenal in the semi. He survived Alex Ferguson while Cristiano Ronaldo, Michael Owen, and Owen Hargreaves didn’t. He laid the first goal for the Aviva Stadium in Dublin as MU pounced League of Ireland XI in 2010, and made life worse for Greeks in the 2010 World Cup.

His departure and fall from grace in the Queens’ Park Rangers is most unfortunate and I agree that perhaps, America or Australia is a place to be for him now (Shinji Ono’s renaissance in Western Sydney is astonishing). QPR wanted him to become the playmaker, which is not his role in Europe (yes, in Korea he was the playmaker since as I said, he was the best). I understand the frustration of QPR fans, but they should have (they could not have) remembered him as a successful MU alumni with 200 appearances for the Red Devils, again, he is not a shirt seller (really, why nobody accuses Junior Holliett or Julio Cesar as a ‘shirt seller’?).

The second part of the story is a study of comparison. Shinji Kagawa, a 172 cm attacking midfielder, was the top scorer of J. League Division 2 in 2009, and as the story went, moved to Borussia Dortmund for 350 thousand euros, and made Dortmund fell in love with him after scoring two against archrivals Schalke 04. By the end of the 2010-11 season, he became one of Bundesliga XI. He scored 13 goals the next season, the club’s second best below Robert Lewandowski. His sweetest moment was defeating Bayern Munich in the DFB Pokal final.

Now in Manchester United, he has defeated Asia’s best keeper Mark Schwarzer (stand by for Schwarzer vs Kawashima coming soon), scored a hattrick against Norwich, and became the man of the match in Fergie’s farewell match. Dortmund made him a footballer. Ferguson made him a star.

Hate to write the good news first. Arsene Wenger recruited 19 year old Ryo Miyaichi into Arsenal – his first senior club. He entered Arsenal and picked up a Dutch dictionary and Rotterdam’s apartments listing. He scored three goals and earned nickname Ryodinho. Then he scored against Wigan. Reserves. As a part of Arsenal Reserves. In 2012 Miyaichi couldn’t see the lights of London at nights and had to settle for Bolton. After that, Wigan Athletic. So, nothing related to Arsenal then.

A more tragic story is Park Chu-young. Korea’s great hope for 2006 World Cup, he had the number 10 but suffered from inconsistency. During his time in the K-League with Seoul, he scored more than 10 goals only in 2005 and failed to take Seoul to compete in Asia.

Nevertheless, Park moved to Monaco and played regularly. In Monaco he scored more consistently than he did in Korea, although he still no chance to play continental competition. Monaco was relegated, but with 12 goals, champions Lille were interested to sign him.

And then Park got greedy, heard about the interest from Arsenal, and bailed out of the medical checkup. Wenger, confident with the dozen goals in Monaco, entrusted him with number 9 and entrusted him with no playtime (while kept saying “Park is ready,”). His only league match with Arsenal was against Manchester United. While Kagawa was soaring, Park joined Miyaichi as a loaned out player, with the Korean going to Spain. Again, his club is relegated.

At first I thought it’d be tricky to explain why Ferguson’s players went well while Wenger’s didn’t. Ferguson picked out players that already earned their scalps in Germany and Holland – the indicator is that they were already fan’s favorites. Key performances in the Champions League was a crucial indicator, since Ferguson wanted them to be ready for Champions League playoffs. Wenger bought on impulses, believing that he could develop a talent, while forgetting the development part.

And then, when Ferguson signed both Park Ji-sung and Kagawa, he meant it. He wanted them to be in the first team. Wenger seemed to share a sin of mine – buying a thing and never opened it. Worse, his a human being, not an imported CD or an easy Mandarin book+DVD set – and then lending out the unpacked item to a friend (just lending). It’s not farming, it’s destroying career (I bet Kagawa will wear number 22 next season. Park Chu-young went the other way around, going down from number 9 to 30).

And so, the Red Sir becomes the greatest sensei in England. But first he needed a great resume. He’s not the one making chump into champ – he was making chaps into champs. Wenger believed he could do the same – and then not doing his craft.