And so they went home. You have heard that Shinji Kagawa wrote a formal apology to his fans, which according to my friend Sean Carroll is “as uninspired and predictable as his football in Brazil”. But that what in his (and his agent’s) mind is the right way to do, the right thing to say, to his fans. His Japanese fans. And even Japanese who are not his fans. But Japanese. And then his non-Japanese fans.

But Kagawa is in bigger spotlight than Shunsuke. Back in Hide Nakata days there was no Twitter, YouTube, 24/7 updated football networks, and although it had started, European elite clubs did not receive as much as Asian sponsors as today. Kagawa truly believes he has failed his fans worldwide, both Japanese supporters and Manchester United fans. And sponsors. He should have done better, but the Ivory Coasters (what’s the proper noun for citizens of Cote d’Ivoire? I’m sorry) were so scary. Scarier than the walking Barbie doll in Beyond: Two Souls. He should have be able to do one-two with Honda, slashing through gasping Zuniga, and lobbed an overhead pass to Kakitani which the forward would have headed home.

Why can’t Japan play football like this? Because life is not a manga.

But he didn’t, did he? Nor did others. Or the whole English and Spanish defenses, in fact. But let others write about the Europeans. We’ve seen how scared little boys were the Japanese defense against Colombia, how nervous the forwards were against Greece.

In Jakarta Post, I argue that Asians in general don’t pay attention to the failures of Asia in 2014. They accept that Asians are terrible in sports as a matter of fact (never mind Michelle Wie, Jeremy Lin, Kei Nishikori, and yes, Shinji Okazaki) and naturally they omit Australia. On the other hand, there’s a persisting myth in Asia outside Korea and China that Japanese team possess the Bushido spirit.

Asians actually glared at me for saying “if you want to see Bushido in football, see Australia.” Now that’s brave football. Who cares if we get three goals past us? We’ll just attack and tackle. Part of it is the genetic of having European parents. And yes, one Mike Havenaar is not enough (I maintain that he deserved number 20 over Manabu Saito).

But essentially, Japan’s and Korea’s hesitation and lack of bravery during the matches were caused by fear of failure. When you are worried of making mistakes, you’ll make mistakes. Cliche but true.

Then, as John Duerden and other Western (but not Asian) journalists have said, Japan and Korea have no number nine – the goalscoring hero, the van Persie, the Suarez. So do Australia and Brazil, actually. So Brazil has to make sure somebody will be better than Luis Fabiano and Fred (and not having his European manager puts him as a winger) and Australia will also help Adam Taggart being better than Josh Kennedy and Scott McDonald.

But the lack of number nine in Japan and Korea also have to do with culture, I guess. Japanese boys want to become Captain Tsubasa, number 10, the creative playmaker. Number nine in Tsubasa’s saga is the brash, rude, and antagonistic Hyuga – who didn’t make it into Juventus starting 11. On the other hand, Korean boys want to become the speedy number 7, like Son Heung-min, Lee Chung-yong, or Lee Chun-soo in the past. Graceful and popular with girls. Koreans perpetually describe their football as “fast”.

Why? Because number 9 has to hog the ball and makes the final decision. He has to be under the spotlight. Of course many boys like that idea, many men eventually become them, the JFA and J. League continuously make such campaigns to encourage more attacking play and more goal scoring opportunities.

But how on Earth it could be a Japanese habit, Japanese psyche, if the Japanese keep on with group mentality and shunning of individuality in life beyond football? Even the closest thing to Hyuga, Keisuke Honda, showed himself as a 15 minutes attacking midfielder.

What Javier Aguerre, the new coach of Japan, can do is to develop Shinji Okazaki to become a full time number 9, with Yohei Toyoda, Yu Kobayashi, Junya Tanaka, and Mike Havenaar as next in the pool. Okazaki could scored 15 goals for Mainz last season because he had no such fear of failure in Germany. And because he was the number 9 for the club. 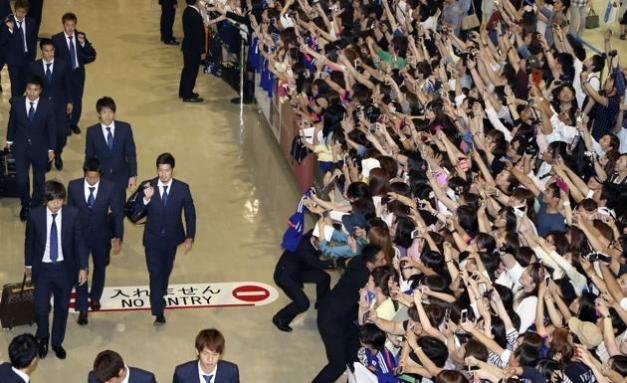 As for Korea. At least Kawashima and co., in their wonderful suits, were welcomed by squealing (always squealing) Japanese girls in that blue Adidas shirt. On the other hand, the Koreans were pelted with yeot, translated as toffees. Interestingly, among Chinese-Indonesians “toffee” is also an insulting word. So I guess the origin of the insult came from China.

Death of Korean football? Hardly. They didn’t call it death of Korean football back in 1998. Again, because back in 1998 they had no Twitter, Cyworld (or did Korea already have Cyworld back in 1998?), and Nike banners of Ki Sung-yong everywhere. And a dozen of European based players. Cha Bum-kun was more even disgraced back then. The pain was supposedly more…painful…with the economic crisis (called “IMF Crisis” by Koreans until today, blamed on IMF rather than their own fat cats) gripping, but maybe back then, Koreans thought everything sucked, so it’s appropriate for football to suck too.

In 2014, however, Koreans strongly believe they are the darlings of Asia. Japan’s sun has set and China is vilified, but everyone loves Lotte, K-pop, Korean drama, and Samsung. So everything nice and football has to be nice too. Why can’t football be nice?

After seeing Germany versus Algeria, I’ve come to admit the quality of Algerian football. Korea should have defeated Russia, but their only mistake against Algeria was they got panicked and scared, just like Japan in second half against Ivory Coast. Algeria could beat them in any day, even with better composure.

But now I’m finishing Amanda Ripley’s The Smartest Kids in the World. In Busan, she followed an American who dropped out of his exchange program out of frustration, and a Korean who was relieved to move to New Jersey. Nobody, even the Koreans, is happy with the way Korean education is run.

So in school and office, Koreans are pressured by themselves to be perfect. They berate themselves and are berated if they don’t do things perfectly. So that what happened with the toffees. The supporters, pressured to be perfect in college and office (or even in playing Starcraft), were angry that the Warriors were not perfect. Just like Xavi and Hart.