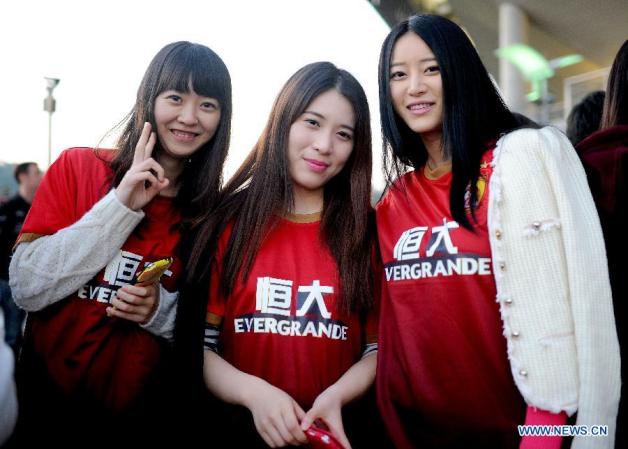 Are they Japanese? Are they Koreans? No, they are Chinese!

1. So much for Japan’s determination

“Japan looks to wrest Asian club crown from China”. For China, read Guangzhou Evergrande. Sure, Evergrande are not the only strong team in China – there’s also Guizhou Renhe, who defeated Guangzhou both in the 2013 Chinese FA Cup, and then the Community Shield, er, Super Cup.

Japanese clubs’ terrible records in the continent baffle even the Japanese. Then again, you can say the same thing for the English clubs. Well-funded teams? Check, although no flamboyant foreign billionaire owns a J. League club. Well known teams? Check. Yokohama F Marinos. Urawa Red Diamonds. Gamba Osaka. Just checking. Guess you might have heard of them compared to say oh, er, Pohang Steelers or Central Coast Mariners. Strong national sides? Check. Although continental wise, this applies better to Japan than to England. An island(s) nation who seems, at times, detached with the rest of the continental family and others love to make fun of its occasional troubles although secretly deep inside they love it and want to have its babies? Check. Ah.

Cerezo can try to Evergrande and bought Diego Forlan. But Diamanti he was not. Not when he played only for 27 minutes to replace Takumi Minamino (yes, I haven’t heard of him either). Yoichiro Kakitani, Japan’s next best thing, does not move to Bundesliga for a reason – he could not unlock a Korean defense twice. Besides those two, Aria Hasegawa, and Kim Jin-hyeon, I didn’t register any other cherry boy.

Sanfrecce look set to repeat 2013 – wonderful in Japan, terrible in Asia. Heck, they played the same team like in 2013 – minus Nishikawa, who moved to Urawa. Yokohama, oh, just marvelous.

Maybe it’s not a coincidence that the only Japanese team to win match day 1, Kawasaki Frontale, featured three foreign players. AFC and perhaps, perhaps fans, worry that an Asian club would field 10 Brazilians, Argentinians, Serbs, and Nigerians (and Koreans, perhaps) just like they do in Europe had there was no cap on foreign players. Of course all of us are for the development of home growth talents, but Japan is in the danger of not pairing its homegrowns with foreigners who come from different backgrounds, football culture, and mindset. A Diego Forlan is not enough. Sato and Saito had weak wingmen. Kawasaki delivered because Okubo, Renatinho, Kobayashi, and Paulinho could work together.

Lately Japan has reacted to its decline in business, entertainment, and international influences by resorting to isolationism. I don’t want Japanese football to follow the same path.

2. A-League is a different world to Australian national team

The Socceroos still can take on any team in Asia and CONCACAF, and maybe half of Europe, any given day. But A-League teams are still the jokes of the East side. By this time I believe it’s completely unfair that most of Asians, by different degrees of honesty, dislike Australian football simply because it’s…white. I was also guilty of this false mindset. Hopefully, most supporters of Ulsan, Guangzhou, and Seoul satisfied because their teams won and not because their teams won against ‘Westerners’ (although they would feel similarly if their teams defeat a Japanese team later on).

A-League teams, of course, have to step up their game and represent Australian football, made of the mixture of Irish, British, Italian, Greek, Balkan, Turkish, Latin American, and indigenous Australian sporting cultures. And they have to demonstrate it for the full 90 minutes, not just for the first minute or the first half.

3. It’s another season for the Koreans

The victory of Guangzhou Evergrande last season caused worse shock for Korean teams than the Japanese (who hardly reached the final anymore). Worse, more Chinese teams were attracting Korean and Korea-based foreigners to move into the Chinese Super League. Match day 1, however, showed the Koreans that they are still the heavyweights. Japanese Sergio Escudero might not able to replace Dejan Damjanovic, but Osmar can be greater than Adilson. Yun Il-lok looks bound to Brazil 14. It’s astonishing that Jeonbuk owned Marinos without Lee Dong-gook and Eninho at all, and Ulsan maintain the most exciting attacking duo in Korea – Rafinha and Kim Shin-wook. At the end, no Korean team lost match day 1. Expect one to make it to the final.

4. Guangzhou Evergrande is not a super team yet, but they are becoming an East Asian team.

Now for a something different – an East Asian team plays to a sold out crowd in the AFC Champions League. Almost 40 thousands, mostly youth, many were women, came to Tianhe Stadium with all sorts of big banners, compared to 11 thousands who went to Parramatta Stadium and 6000 to Seoul World Cup Stadium. The Chinese are used to make fun of their own football but it’s a great time to be a Guangzhou resident and a football fan. It’s good thing that the stadium and the environment are safe and attractive enough for women to come, despite the terrible pitch.

Guangzhou Evergrande set themselves on a different level with other Chinese teams and so do their fans. They look like, even better than, a hyper reality version of, a Korean team.

5. Buriram United may be the best team in Southeast Asia

AFC was kind enough to give a chance (“a fair go”, as Australians say) to assorted East Asian champions to qualify for the group stage. So we had chances to see how did champions of Hong Kong, Singapore, India, Vietnam held up against runner ups of China, Thailand, and Australia.

So by default, Thai Premier League is the best league in Southeast Asia, then? Maybe. Obviously other leagues are worse. Even you’d think a country as good as Singapore would have made a decent football league, seeing how they’ve made excellent universities, airport, and public transport system. So Thailand is, er, the best of the worst.

In the end, Thailand had to fight for extra spots against Australian and Chinese clubs, and unlike last year, they lost. But Buriram, sporting more multinational side than Japanese and Korean teams (two Spanish, an English, a Japanese, and a Thai-Norwegian), held themselves well against Vagner Love’s Shandong. If I’ve been searching for a Southeast Asian team to support besides my hometown teams, I think my search is over. Vote Buriram.