Five years ago I joined Guardian Football’s World Cup 2010 Fans project, where a writer would represent fans of a participating country. I chose Republic of Korea (South Korea) since my hunch was correct – five British men had represented Japan. Besides me were a couple of British men. North Korea was represented by one old Englishman, probably a Trotskyist. They dig North Korea.

My duty was to tweet comments during South Korea’s matches, and I was very lucky that South Korea surprisingly won their opening match against Greece. I gleefully (pun intended) wrote my report and players’ rating, it’s here.

I represented a proud footballing nation of 50 millions which I never stepped into, which language I don’t understand, which I have no direct relations too. I spoke for the feelings of millions of Kims, Lees, Chas, all the clans.

Because none of them wrote for the Guardian. For comparison, all the African nations were represented by African students studying in Britain, and I supposed there were several hundreds or thousands Korean students in Britain, or perhaps Korean-American or Korean-Canadian readers of Guardian Football. But throughout my twelve years of reading Guardian Weekly or Guardian Football, I never met any of them.

When I applied for the voluntary position, I had no football blog. After 2010 World Cup had ended and the project was folded, I made this blog. Strangely I got to know the Brits who represented Japan instead of South Korea, namely Ben Mabley and Sean Carroll.

I’m very different to both men. They are lucky enough to be born in England as white men (both might have Irish heritage, seeing from their names), learned Japanese, and moved to Japan to work. To put it short, Japan is the dream country of all Asians save for Koreans (even until early 2000s, Korean pop singers and footballers built their careers in Japan). I’m lucky enough to be born in a middle class family in Indonesia, Southeast Asia, and studied in Australia.

And yet I threw away my chance to stay in Australia and the 2006 World Cup was a scarring experience for me – Australia, representative of Oceania, demolished Japan, the Kings of Asia, just in five minutes. I hated Australia for several years because of that.

Australia was the place where I developed my Asian pride. Because it’s a developed nation, it’s easy to find goods, people, and cultural items hailing from Japan, Korea, China, and India there. It’s easy to find Chinese people from different backgrounds there – Malaysians, Vietnamese, Filipinos, Indonesians, Thais. And everyone is proud and open about their background. This is very different to my experience in Indonesia, where Chinese-Indonesians subdue their own identity due to fear.

So why do I support Japan and South Korea instead of China? I supported China in 2002 World Cup. Of course, it was a bit exercise in futility, and I have little love for the People’s Republic of China. You know too well why, from its government to its footballers. My love for Japan and South Korea national football teams go hand in hand with my love for their foods, video games, movies, cartoons, electronics, clothing labels, and cute stuff.

And of course, Japan and South Korea can take on the world on football, unlike China. Japan and Korea have footballers playing in Europe and famous enough worldwide.

Throughout four years of blogging on Asian football, I feel loneliness. Many people I know that talk about Asian football are usually Anglo-Irish men, Australians or British, who are based either in Australia or Asia and work as journalists. They’re on football stadiums week after week, they interview footballers, and they fly between cities.

Some Korean women did follow me, but usually communication ended after it’s clear that I’m not Korean and I don’t speak Korean.

Sometimes I cursed my own fate of being born in and living in Indonesia instead of say, Singapore. But even if I were a Singaporean, local football scene is also far from my ideal. I would be sitting with few other football geeks cheering Malay and foreign players in deserted stadium, complaining about the masses (i.e. Chinese like me) who strolling the malls wearing Manchester United and Barcelona jerseys and the mismanagement of the league (not to mention the single-season foreign teams). Being a Hong Konger would be just few notch up.

Being born as a Japanese or Korean might have its perk of having a mass media reporting local football and packed stadiums, but I would also get frustrated with the timidity and dishonesty of the media and the football world in discussing controversies and bad stuff.

And in any case, I would grumble why do I learn everything about local football from the white men.

In fact, all my world knowledge I get from the white people. Not from my own people.

So I take the irreverent and humorous approach, a la Guardian Football. I want to be entertaining and honest, I don’t want to be being the lying cheerleader of Japan or South Korea or being the bitter “they suck anyway’ prophet of doom.

I enjoy what I wrote, but it did not make me enjoying Asian football better. I could not growth a community, I could not make new friends. And the quality of Japan’s national team is just maddening.

But the main reason I won’t write any new entry on Asian football is because I want to concentrate on my newfound passions. Last year, unexpectedly, I entered the world of feminism and in no time I made new friends and connections worldwide. My Twitter has become so lively with notifications and new tweets that made me can’t stop learning, discovering, exploring, and even laughing.

The consequence is I’m getting disillusioned with everything I loved about Japan and Korea. After saying goodbye to anime and K-pop, now I’m not sure if I’m saying goodbye to their footballs. That might be different. I will always love football, I will always love Japan and South Korea. But I believe it’s futile to write more about them. John Duerden has always written the best bits about them, and also Australia that now I also love (I still dislike China), and if there’d be someone else replacing him, it’d be another Anglo-Irish man instead of Japanese or Korean.

In short, I want to spend my time and energy in writing about feminism. It’s kinda sad that although Japanese women footballers are among the world’s best, so little attention is given to them, including by the Japanese themselves (who would keep complaining about their clubs and men national team). Even it’s kinda sad that JFA will always differentiate the color for men and women national team jerseys, instead making it red for the women too (after the flag, right?).

Thank you for reading and following my blog and for being patient with me. You can stay in touch with me via Twitter on @mariorustan, where I would still tweet about football in Australia, Japan, and Korea. 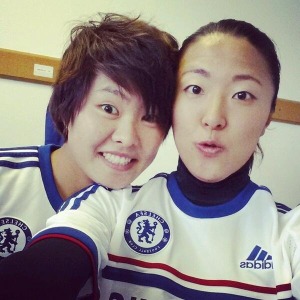